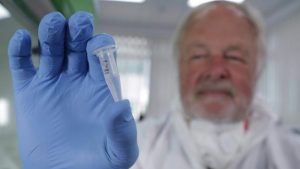 DNA testing is taking a bite out of the Sasquatch legend. After scientists analyzed more than 30 hair samples reportedly left behind by Sasquatch and similar mythical beasts like the Himalayan Yeti, they found all of them came from more mundane creatures like bears, wolves, cows and raccoons.   In 2012, researchers at Oxford University and the Lausanne Museum of Zoology issued an open call asking museums, scientists and Sasquatch aficionados to share any samples they thought were from the legendary ape-like creatures.

“I thought there was about a 5 percent chance of finding a sample from a Neanderthal or (a Yeti),” said Bryan Sykes of Oxford University, who led the research, the first peer-reviewed study of Sasquatch, Yeti and other “anomalous primates.” The study was published online Wednesday in the journal, Proceedings of the Royal Society B.    Sykes and colleagues tested 36 hair samples from Bhutan, India, Indonesia, Nepal, Russia and the U.S. using DNA sequencing and all of them matched DNA from known animals. Most were from bears, but there were also hairs from a Malaysian tapir, horses, porcupine, deer, sheep, and a human.

While Sykes said they didn’t find any proof of Sasquatch-related creatures, he acknowledged their paper doesn’t prove they don’t exist.

“The fact that none of these samples turned out to be (a Yeti) doesn’t mean the next one won’t,” he said. The scientists did find two samples from ancient polar bears in the Himalayas, who are not known to live there. That suggests there could be a new or hybrid bear species out there”, Sykes said.

There are soon to be more studies coming soon – so stay tuned.

The first thing most of us in research read about as regards to any hair analysis was a paper from John Green’s 1978 Book, Sasquatch, the Apes Among Us on page 284. On that page John explained a half dozen light colored hairs found in the 1960’s by a government game guide named Wayne Twitchell that were subsequently sent to a laboratory in Los Angeles. […]