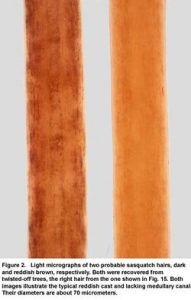 The first thing most of us in research read about as regards to any hair analysis was a paper from John Green’s 1978 Book, Sasquatch, the Apes Among Us on page 284. On that page John explained a half dozen light colored hairs found in the 1960’s by a government game guide named Wayne Twitchell that were subsequently sent to a laboratory in Los Angeles.

There, Ray Pinker, a veteran of 36 years in police crime lab techniques examined the hairs issuing a statement that the hairs showed both animal and human characteristics; interestingly, they did not match any samples Pinker had in his collection. He said that they resembled animals hairs in showing a variation of color and thickness from the root to the tip, whereas human hair is uniform in color and thickness, but that the scale pattern on the outside of the shaft was similar to that of human hair and that there was no continuous medulla, or core visible in the center as would be the case with almost all animal hairs. There were both coarse outer hairs and fine hairs from an undercoat. On the two pages cited, John relates what a laborious and thankless task identifying hairs really is and how quickly he lost interest in the process.

Then in 1992, Dr. Grover S. Krantz published Big Foot-Prints: A Scientific Inquiry into the Reality of Sasquatch. On page 128 he writes: “It is now possible to extract DNA from a hair sample to determine the species, or even exact individual if there is a known specimen for comparison. This is easiest done with a follicle, but just a hair shaft will often suffice.  On the issue of Sasquatch hairs, Dr. John Bindernagel writes in his book North America’s Great Ape, the Sasquatch  “Hair attributed to Sasquatches has been recovered from apparent Sasquatch beds, shrubbery, fences and trees where sightings have occurred.”

DNA testing is taking a bite out of the Sasquatch legend. After scientists analyzed more than 30 hair samples reportedly left behind by Sasquatch and similar mythical beasts like the Himalayan Yeti, they found all of them came from more mundane creatures like bears, wolves, cows and raccoons. […]