The year 1969 is considered to be one of the most active and important years in the history of Sasquatch research.  John Green, the preeminent authority on Sasquatch, even wrote a book about all of the activities that happened during 1969 and aptly named it “Year of the Sasquatch”.  It was during this year that one of the most famous Alberta reports came in.

In 1969, work had begun on what is now know as the the Bighorn Dam, which is located in western Alberta near the town of Nordegg.  On August 24 of that year, five men witnessed what would come to be known as the Bighorn Dam Incident.

Harley Peterson and Guy L’Heureux were working on a foundation for a pump at the construction site when something caught there eyes high on the ridge above them.  It was a dark, upright figure that seemed to be watching what was going on below. The figure stayed standing in that spot for about a half hour, then it sat down for about 10 minutes.  By this time the number of people watching had increased from two to five.  Stan Peterson, Floyd Engen, and Dale Boddy also observed the figure at this time.  The figure then stood up again for about 15 minutes, then it walked along the ridge and disappeared into the tree line.

Two of the five men decided to get up on the ridge to see if they could find any footprints and also so the other three men could judge the height of the figure that had been up there.  What the men on the ground realized then, was that this was no ordinary person that had been standing up there.  By comparing the height of the two men now up there to the trees behind them, the men on the ground judged the figure to be have been at least 12 feet tall if not closer to 15 feet tall.  This is definitely one of the largest Sasquatches to have ever been reported in North America. 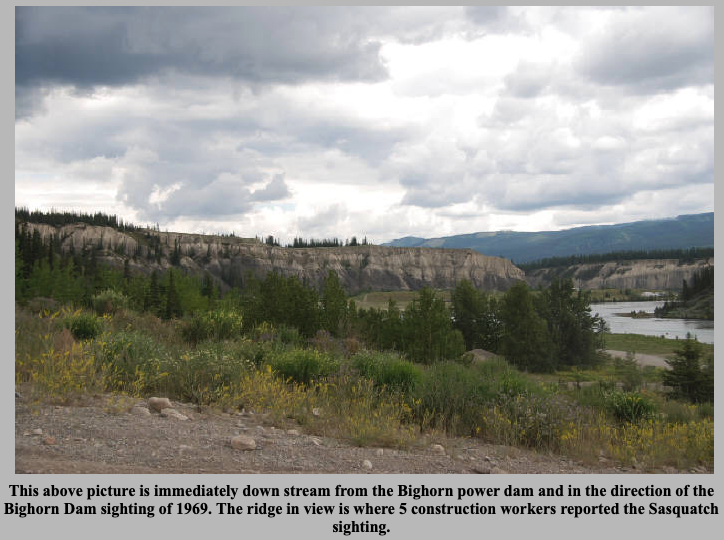 Prior to this report, there were many other reported incidents involving the Native Americans who inhabited the area above the dam and the creature known as Sasquatch.  A man named George Harris, who was living in Nordegg at the time of these events, photographed two alleged sets of footprints that had been found by the Native Americans in the area.  One set measured 17 inches long and the other set measured 13 inches long.

Another young Native man was chopping wood one day, shortly after the prints had been found, when he found out he wasn’t alone.  He noticed a Sasquatch watching him from the edge of the trees.  So he just kept to himself and kept chopping wood.  When he looked up again, it was gone.

A young Native female at the time, said that her and three other older females saw what appeared to be four of the creatures on a mountainside near Windy Point.  She was of the impression that they had just caught something as two of them were bending down and the other two were walking about near by.  She said that they looked to be about the same size as a good sized spruce tree.

Reports have been filtering in from this area for roughly forty years and they just keep coming.