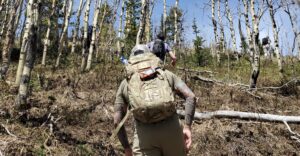 Members of the Alberta Sasquatch Organization found some time in May of this year to head out to the Brazeau Canyon Wildland in our search for Alberta’s legendary sasquatch residents. The BCW is located just south of Jasper National Park and contains tremendous opportunities for backcountry camping, getting muddy on OHV trails, and it contains all of the ingredients necessary to make a nice home for Alberta’s resident sasquatch. Each year we attempt to get up into this rugged mountain wilderness because of the plethora of reports we have received over the past several years. Reports typically follow the Forestry Trunk Road between Caroline and Edson and new ones manage to trickle in almost every late spring or early summer like clockwork. 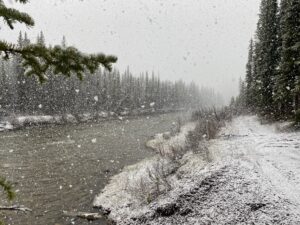 When we arrived at our base camp location for our research week, we found ourselves inundated with precipitation and we continued to get hit hard by the storm for the entire day. One of the fire lookout access points we were hoping would be snow free was in fact still completely covered and inaccessible. 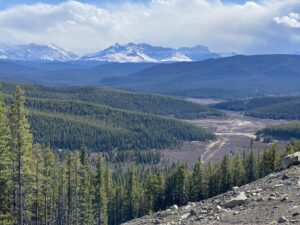 After the first somewhat uneventful night in our isolated base camp we continued to patrol a variety of cutlines and reclaimed roadways through the backcountry. The weather improved significantly on the second day and we were able to look for physical sign such as footprints as the precipitation left ample muddy roads and surfaces. There was also a significant amount of wet snow at higher elevations and gave us another medium to examine for prints. 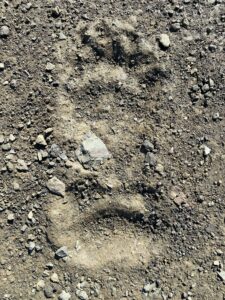 During our trip we found prints for bears, wolves, and ungulates such as deer and elk. We also came across a number of peculiar log arrangements in remote areas that we documented for our own records. We don’t ascribe any specific meaning to this as they’re still within the range of natural phenomena or human activity. Each of the nights we had during our week of camping was different than we are used to due to an early season fire ban put in place by the Alberta Government. 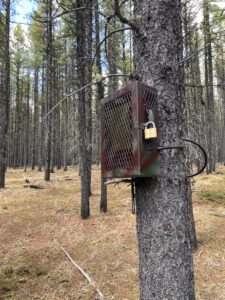 One of the most significant developments while we were in the backcountry was the deployment of our long duration audio recording devices. We use hand made armoured mesh boxes and cable locks to secure these camouflaged devices in canyons and valleys in order to record the nocturnal residents of the forest for up to 8-10 weeks at a time. These are strategically deployed in areas where sasquatch are believed to be, but this accounts for their shyness towards trail cameras. It provides an alternative method of measuring and documenting wildlife when we can’t be present to listen ourselves. 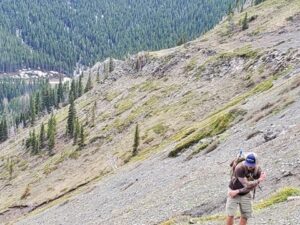 The final week of May this year we received an emailed report from a witness and his mother who had been hiking between Big Iron Lake and Bear Pond, just west of Indian Graves. We followed-up over the phone to validate the sighting and establish general credibility. We were excited to hear about this sighting along a windswept mountainside in such an accessible area so we packed our bags and were out there the next day.

The witness provided this sketch over the face where it was spotted. The X on the left denotes the estimated point of origin where they began observing the subject. The red circle is roughly where the bighorn sheep were located as it passed over them, and the vertical dogleg at the end of the traverse indicates where the subject began moving directly west and over a treacherous scree slope. The figure in question was all black and seemed larger than a man. It was viewed late in the afternoon on a Sunday and was seen moving away from any known human occupation.

The possible sasquatch that was spotted was moving from south to north across a fairly steep slope in a brisk manner and though their pace wasn’t extraordinary, its ability to clear a tremendous amount of distance in such a period of time left a mark on the witnesses about the ability and the prowess of the subject. Then after passing over a herd of bighorn sheep which largely ignored the creature, it doglegged west and traversed a difficult scree field and vertical shale features with ease and disappeared over the mountainside. A measurement by map indicates an observation distance of 1.0KM, however with the inclusion of the elevation, the probable distance to the subject was closer to 1.2 or 1.3KM.