The Alberta Sasquatch Organization has had the privilege of venturing out into the woods of Western Alberta on several occasions this summer in the pursuit of our objective to spend some time in Bigfoot country and spend several successive days and nights in investigating and pursuing our interest in validating both witness experiences as well as historical records of mysterious encounters with the unknown. Our areas of interest have included sighting locations from Waterton Lakes National Park all the way north to Edson, all along the eastern slopes of the Rocky Mountains.

Back in July 2018 we spent a weekend at the location known as the Alberta Habituation Site which was popularly featured on the television series Survivorman: Bigfoot as well as on another popular Sasquatch documentary that can be found on online streaming services. The location itself is very remote and the specifics of where it’s precisely located are a closely guarded secret by the few who dare to venture there. It was originally reported by a woodsman who had shared his terrifying encounter with a notable and well known outdoorsmen in the Alberta hunting community and since that time the location has been used by several investigative groups seeking to satisfy their curiosity with the possibly encountering one of the legendary creatures.

The members of the Alberta Sasquatch Organization who attended had arrived on a rainy weekend night and began establishing a camp site and arranging our vehicles in a manner in which we could leave quickly in the case of an emergency. We verified the suitability of our firewood, first aid supplies, and equipment and then began sweeping through the vicinity of the camp to look for trace evidence of anything unusual. During our stay there we explored various cuts lines, dated trap lines, and bushwhacked along various routes of interest along several ridges and hills. Throughout this time we had deployed some camera equipment as well as setup some ‘gifts’ for our forest friends; this included fresh fruit & vegetables, a jar of peanut butter, and a white handmade statue carved from drift wood. We thought the carved statue would be a unique touch and something distinct and eye-catching to lay out in a prominent location, set back over a kilometre from the main camp site.

Of note, the alleged tree structures which have appeared on several documentaries and YouTube channels were visited quite easily as they’re clearly identifiable from the decrepit road entering the location. One of the structures has since come down in the location and now lies indistinguishable amongst the thick deadfall covering the forest floor. It’s still a point of debate amongst members of our party on whether or not they could have been man made or possibly just a novel collection of trees pushed down by snow load or wind into a pattern that humans are searching for some deeper meaning in.

During the duration of our stay we encountered camera traps of unknown ownership at the intersections of cutlines, presumably left by other investigators or perhaps hunters/trappers inspecting the area for game. We noticed that the atmosphere in the area is extremely calm and there’s very little noise of animals and few signs of ongoing human activity. The feeling itself though wasn’t a heavy eeriness or sense of being unwelcome.

One of the most important elements we always look for is for proof of a suitable food source that an apex predator would be able to stock and hunt. We noticed several docile, miniature game birds as well as the presence of some minor berry bushes. There was plenty of sign of predators such as bears and canines from prints throughout the area. There is also a significant presence of wild horses in the area and their droppings were distributed everywhere we went.

In the evening we felt jovial and comfortable. We decided to build a modest fire for warmth and heat during the evenings after twilight and would leave one person to maintain the fire while we made minor incursions into the wood-line and up to the tree structure areas past midnight to remain silent in the dark and listen for activity. Unfortunately this yielded nothing and we carefully meandered back to the camp.

As a final resort we used some of the time we had after dark to increase our noise making, and at one point engaged in the controversial calling technique of wood knocking, waiting to see if a response would be heard. Again, this yielded no noticeable response but our efforts were also hampered by continuous rain. 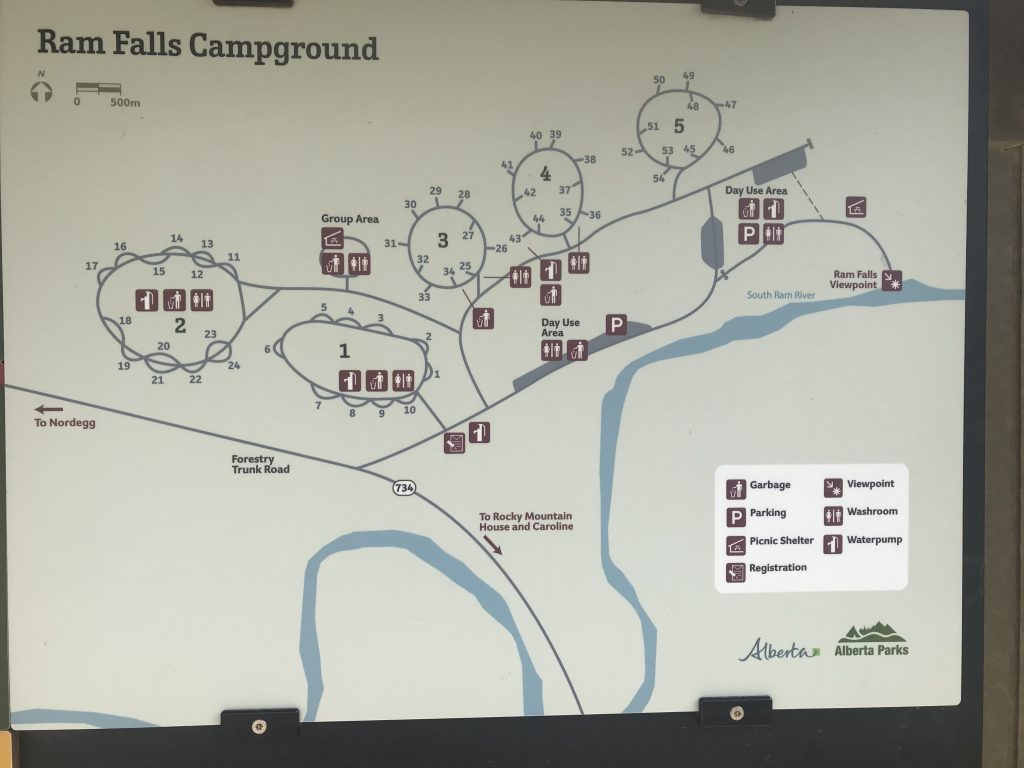 During this extended investigation we spent several days and several nights in the area immediately north and south of Ram River Falls Provincial Recreation Area along the Forestry Trunk Road (FTR). We spent an extensive period of time investigating the area approximately 5KM north of the falls and the area roughly 5KM south of the falls including several cut lines along long distances working eastwards from the FTR. During this research period, we also investigated areas adjacent to old logging routes as well as reclaimed oil and gas leases that permeate the area. We concluded on the final night with an after dark investigation of a reclaimed oilfield patch of land north-east of the Ram campground.

This extended investigation primarily consisted of daytime incursions into cut lines by quad (4×4) and by foot along cut lines eastward from the highway, with disembarkation points being chosen based on our ability to penetrate deep into undisturbed wooded areas in search of sign and presence of possible Sasquatch. These were followed by evenings spent scanning ridge lines from elevated areas with a FLIR monocular system. 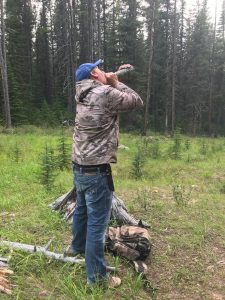 On the final full day we setup an elaborate ‘gifting’ area with fresh fruit and made several eye-catching cairns to denote the area and draw attention to the food items for anything intelligent enough to note them and curious enough to investigate them. 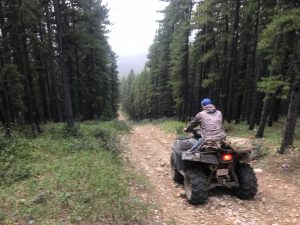 We went for a walk for fire wood in the bush and on the hike we found some strange tree structures, on the way back I saw something black and on 2 legs running away from our camp in the trees I thought I was just seeing things. […]

Was driving on the forest trunk road outside of nordegg. I stopped near lynx creek for a bit of a break and noticed some big footprints in the ground along side the creek. […]