OBSERVED: I am an avid hiker, fisher, and camper. I do go camping on my own quite often. I was camping on my own west of the town of Bragg Creek Alta. At about 10:00pm Thursday July 22/10 I started to hear a fair amount of movement in the forest around me. Around 10:30 I started to hear what sounded like the banging of logs together, so I did the same in return. I heard nothing. Around 1:30 that night it was pouring rain thunder and lightning. Again I heard the cracking of deadfall but this time it was very close to where I was camping. This woke me up quite abruptly, laying in my tent listening with shear amazement but not moving. Then I heard very loud breathing right beside my tent thinking it might be a bear. At this time I’m a little frightened.
For the next 3 to 4 hours while it is still pouring rain I heard a constant breaking of branchesI had a tarp strung outsid my tent for my cooking area. The animal literaly hit the tarp as to be walking underneath it, that made me jump. I slowly unzipped the flap on my tent to see if I could see what was making all of the noise and I saw what seemed to be a upright animal walking down the hill towards the creek below my camp. Was camping on a plateau. that was as far as I was going to move at this time.

The next thing I hear was a grunt noise as if someone is exerting themself and heard this animal pickup a large boulder and throw it.
Next I heard him push over a large fur tree that was at least 30′ tall. Scaring the living crap out of me. This all happened the first night that I arrived. Around 4:45 to 5:00 am when daybreak was starting the rain finally stopped I heard what to be a very loud bird like call, but was not anything I have heard before to the north of me, then I heard a response west of me, then a response east then south. It sounded like I was surrounded. after the last response there was nothing. These calls happened every morning that I was out there, which was 3 nights 4 days. When I left the area I called the conservation officers office and asked if they knew of anyone in the area at these times. They said no but were not sure.

ALSO NOTICED: I did see the next morning impressions in the grass what appeared to be around 14 inch footprints, not bear, moose, deer, or even cattle which do range freely in the area.

OTHER WITNESSES: No witnesses

OTHER STORIES: no, But the consevation officers I have talked to have said people have heard strange sounds within these boundries.

The location of this incident is an area of interest for BFRO research and is close to a large wildlife area that is closed off for 6 months of the year. The witness frequently camps solo for short periods but this was his first time in this particular location.

Upon choosing a place to make camp he heard a commotion on the hill opposite. Assuming it was a bear or a moose he made loud noises to alert the animal of his presence. Later that night at about 10pm he heard some wood knock sounds in the distance. Between 1-130am he awoke to sounds of heavy footfall moving towards his tent. Whatever it was sounded as if it had walked right up to his tent. Shortly thereafter the creature walked through his cooking area that had a tarp protecting it from the rain. The tarp was approximately 6 feet high. The witness heard the creature hit the tarp as it walked underneath it. At this point he sat up and unzipped his tent, he looked out and could make out what appeared to be the shoulders and head of something walking erect down the hill away from his site. It was dark and raining so visibilty was not optimal. This creature then went on to throw deadfall and/or stones around and snap branches in what would appear to be an aggressive display. This lasted for several hours. The witness was suitably impressed and had decided to leave upon first light.

At 445am, which was dawn, the witness heard a wail from a ridge a couple of kilometers away this was immediately followed by a response from a different hill and 3 more responses in sequence all from different locations and directions from his camp, and more or less forming a crude polygon around it. The witness is familiar with local animals and had not heard these sounds before. It sounded to him like a roll call. Once the light of day came he decided to stay. Over the next few days he heard a few grunts but nothing compared to the first night; however on the following two mornings he heard the same “roll call” with a lead wail and 4 responses each day. I visited the location with the witness and we also took a group from the Alberta expedition to spend an evening at the location. The location did unveil several interesting tree structures. It is clearly travelled by deer, moose and free roaming cattle.

Photo of his campsite: 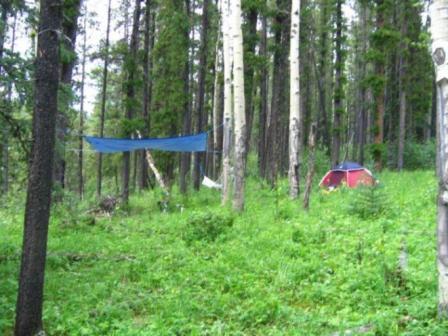 Photo of a possible structure in nearby ravine: 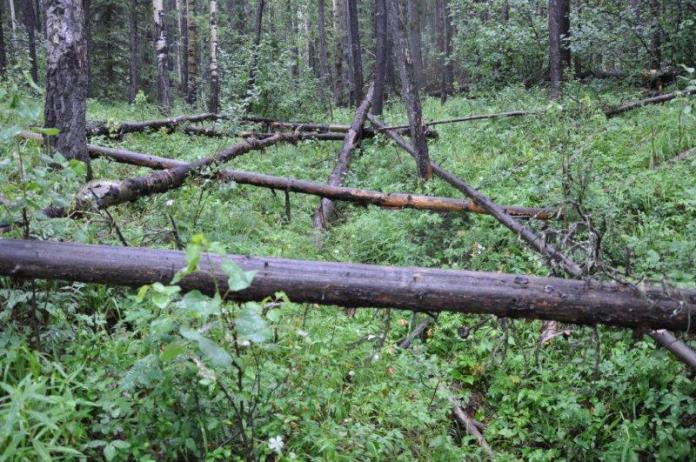 I saw some very clear tracks that crossing the mud of the North Boundary Trail in Jasper National Park. I was on a solo-backpacking trip into the North Boundary Country in 1987 or 1988 I had been on the trail for probably a little under a week and only saw the usuall animals to be seen in the area. […]

My ex-wife and her family where out in the area of Haig Lake, AB. Her dad was driving a grader for the fire crews, building roads to access the fire area’s. There was not much to do so they fished alot at Haig lake. […]

We were herding our cows home at night (they had got out of the pasture) and were walking to the west heading into the wind. We were near the edge of a ravine that came out of the “endless bush” a mile away (the ravine is thickly treed). […]