OBSERVED: What was found was hundreds of very large footprints. The toes were in many different positions in many of the tracks ruling out as I see it one solid mold making the prints as well as these prints were sunk into hard river silt where a 200-lbs. man had to jump to even make a mark. In addition to this the tracks continued quite some distance and were followed by my cousin for about 2 miles up the river banks and into the bush. As it climbed the hill it used its toes to dig into the hillside to get better traction. It also grabed trees to help pull itself up, the smaller of which were torn out by the roots.

ALSO NOTICED: My cousin told me that he did not believe in sasquatches up to this point in his life and really doesn’t know what to think now. But one thing he does know is that whatever made these tracks was living, breathing, walking on two legs, and was not a man. He has lived in northern Alberta all his life and would not be easily fooled in the bush. This story of his has been the basis of my fascination with the subject for many years now.

OTHER WITNESSES: I’m not sure who first found the tracks but they quickly became the focal point of everyone’s activities. But as far as I know my cousin was the only one who actually followed them.

TIME AND CONDITIONS: As I can remember about 1972, certainly the first half of the 70s.

ENVIRONMENT: This area is very isolated. There is only one road into this part of Alberta as a quick look at a map will show. There are a few farms in this area. The ground is fairly flat save for the river banks where this occured, but even the river banks that far north are not great about 50 to 75 feet. The forest is very dense and lots of it. The bush extends south for about 250 miles and goes north to the tundra (maybe 500 or 600 miles)–millions of acres anyway.

This is an update of this report, which was originally posted to the BFRO website in 2001.

A few days ago a cousin of the man who followed the trackway wrote in to say he had a photograph of one of the tracks. He agreed to send a scanned image of the photograph he’s had since 1972. It’s quite a striking track. 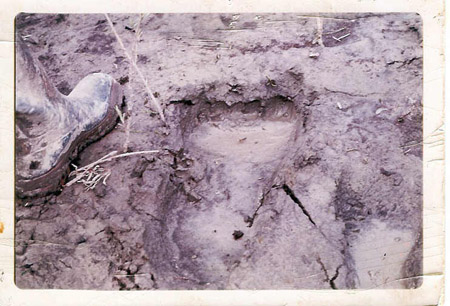