LOCATION DETAILS: As in the above description. On highway 66.

OBSERVED: I thought that I would send you a message about what happened to me last night. June19, 2018.

I had decided to go out into Kananaskis country to take pictures of the setting sun behind the mountains. I had found a spot on Highway 66 where there was a pull out, so I could set up my tripod on firm ground. (pavement) I had gotten there earlier than I needed to so that I could prepare my equipment.

As I was sitting in my car waiting for the right amount of sunlight I heard a wood knock but didn’t think anything of it. (The car was turned off) I also heard a lot of birds.

When I heard the second knock I thought ok “what is that”. I then went to the back of my car and got out a baseball bat that I had in my vehicle. I then went and did a wood knock myself thinking “Yea like I’m going to get a reply”. About 2 minutes later I got a knock, but it seemed to be a little closer. The first one was like 2 kilometers away and this one was about 1 kilometer away. I then went and hit a different tree to make it sound like I was a different one. This one was answered from even closer to me like maybe 800 meters. I thought great I will try again, but delay on doing it right away. I did a knock and went back to my car to get my camera just in case. Nothing happened so I grabbed my camera and was walking across the road to see if I could see anything to take a picture of what ever was there when a knock came from about 300 meters away. This was all happening on the north side of the road. I went back to my vehicle and got the bat again and struck another tree, this time I heard a scream-howl from the south side of the highway (the side I was on) about 2 KM’s west followed almost right away by another tree knock on the north side again about 300 meters away.

All of this happened between about 9:45 and 10:45 at night.
This was pretty much the end of all of this.

I spoke to the witness via phone and we enjoyed a pleasant chat about his encounter and about sasquatches.

The witness is a retired mail carrier and is working on his photography as a sort of side business and hobby. He had driven up Highway 66 past Elbow Falls in Kananaskis Country to a location he could catch the sun setting over the mountains. Once his camera gear was set he sat with the windows open to wait for the right lighting. This was when he heard one single knock in the distance.

The witness stayed in the location for approximately 30 minutes more, listening, taking his photos and eventually packing up his camera gear.

When he decided to pack up and leave he heard a howl that he could not place. He explained that this sound was unlike anything he had heard before. The witness wasn’t able to explain the sound other than it was two toned (high/low). It was very unusual to him.

(At the time he noticed on his fitness tracker that his heart rate had jumped from 78 BPM to 102.)

Witness visits the area often with his photography and has seen many animals like: deer, elk, moose, wolves, foxes and coyotes on previous trips.

The witness made a return visit to the same location with his family. They attempted some calls and howls; his brother in law made a call that received a reply. They heard a low pitch howl in response to the call they had made. He could not place this sound either.

I believe this witness to be very credible based on multiple conversations about his experience. He is now excited about the possibility of what could be out there.

The area where this incident happened, near the beginning of Powderface Ridge, has long been known to Bigfoot researchers as a hotspot in Summer. Unbeknownst to this witness, an investigation of this area was included in the Alberta episode of Finding Bigfoot about 5 years ago.

It is probably the most reliable area to hear or see Sasquatches near Calgary, but it’s only popping for a few weeks in Summer during some Summer’s but not all. This is as reliable and convenient as it gets for Sasquatches in Alberta.

There’s a popular trail up Powderface Ridge but this witness was a few kilometers from it, and this is big country.

There’s short list of explanations for the knocks and responses like these at this location. If you (a scientist) would be at the actual location when they happen and you hear them for yourself you will be able to confidently eliminate woodpeckers and humans as a possible explanation, and this mail carrier was easily able do.

#1 Warning knocks (warning other Sasquatches of an intruding human). Factor leaning against it: The first knocks were the most distant ones — 2KM (1 mile away). The closer knocks came later. With warning knocks the closer ones tend to happen first and the distant ones are the responses

#2 Locating other individuals. Very plausible. One may have been moving westward looking for the other one closer to Highway 66. Factor leaning toward it: At least one responded to his knocks.

#3 Driving (herding) deer in a desired direction. Also very plausible. One Sasquatch may have been pushing a deer herd westward, or perhaps any unseen deer that might be in its path. In that sense it could have been a combination of #2 and #3.

This incident happened in Summer. In and around the Rockies there are extreme changes in elevation. That affects how deep the snow will be on the ground at different times of year. Sasquatches and their prey (wild ungulates like deer) will try to migrate to where the snow is less deep in Winter. They’ll move out of the mountains if they can because that’s where the snow is deepest.

It is very likely that Sasquatches in the Rockies will move seasonally and not be in the same place in Winter (when this report is being first published). 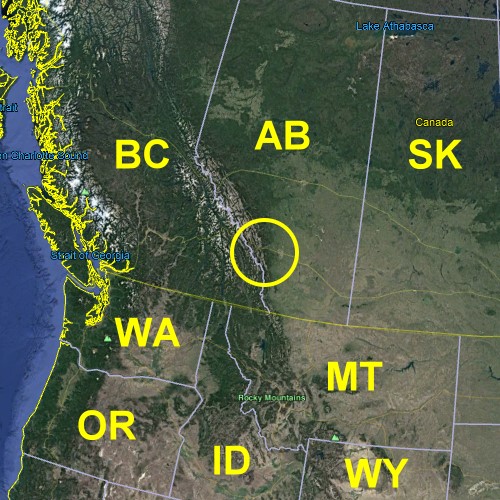 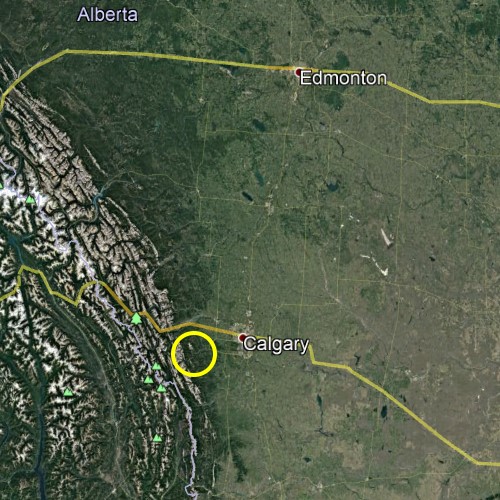 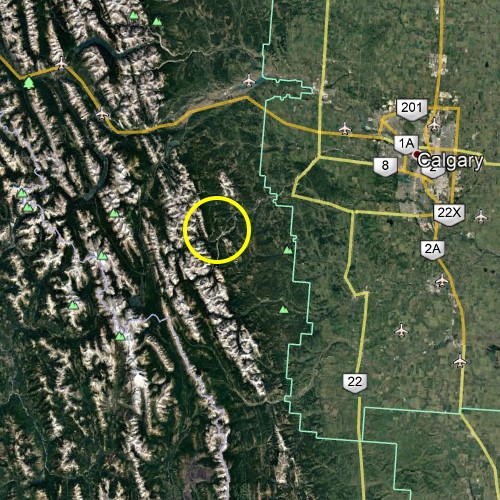 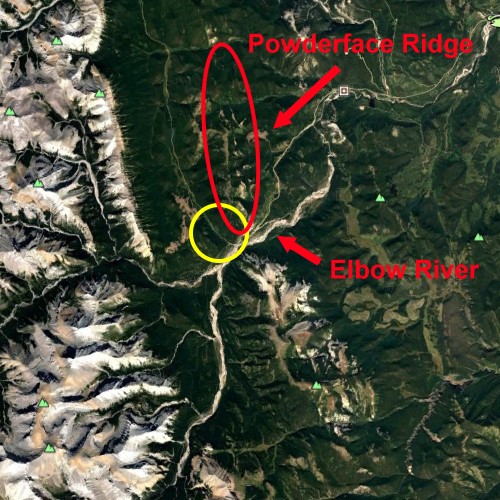 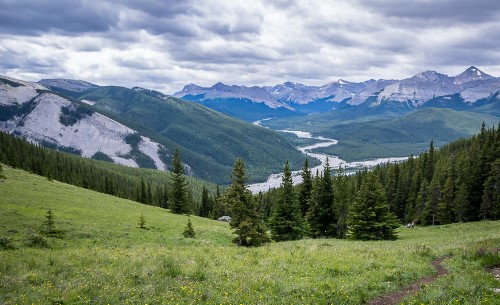 The view from Powerface Ridge down to the Elbow River.

I am publishing this report as told to me by C.R. The incident occurred when C.R. and two other hunting buddies were camped in a relatively remote mountainous area south of Coleman, Alberta. At 11:00 p.m on the evening of their first day of hunting, one of C.R.’s buddies went out of the trailer and heard branches breaking close to camp. […]

Early summer 1997 near Redwater Alberta Canada hwy 38 south around 5:30 in the morning my mother was driving me to work I was only 16 years old and I had the opening shift I was home schooled and worked every day in the city of Fort Saskatchewan… […]

BFRO: Footprint found on the Siksika Nation Reserve near Cluny (2005)